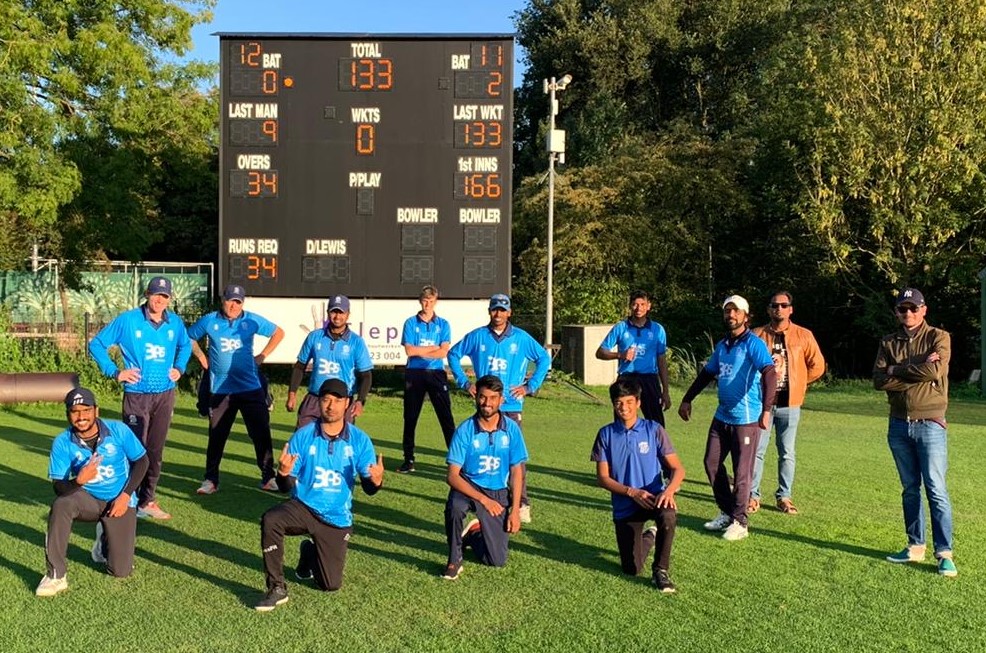 So there I was……in a team huddle after our victory against Concordia. Abhinav Adurty captaining the side because I broke my finger trying to stop a ball at stupid short cover. I had the honour to inform the team that with this win we secured 1st place in the league. As luck would have it this happens in a year when there are no promotions. Kampong 2 won 5 out of 7 games in the 2A league and won 2 out of 2 in the 2E mixed league. We interrupted the Kampong Premier League to start the KNCB competition in July and we played in a league with some friendly and “less friendly” opponents.

On a warm summers day we travelled to the German boarder to go play against Quick Nijmegen only to discover that our opponents were not aware that they had a game. We drank a coffee and drove back home. We could have gone home but instead we had a 2 hour practice session and watched the first team win another game and almost convinced the captain to give Jimme a bowl.  I have seen some strange things happen on a cricket field before, but some clubs never cease to amaze. In a league where the batting side is also the umpire we simply stopped appealing against Wanica Star, except for Shashank, who couldn’t help himself. We took some verbal abuse both on-field and from the boundary in several different dialects. Vikram had his revenge smashing an unbeaten century with some huge sixes off a spin bowler and then telling Josh at the non-striker end: “I don’t count spinners as bowlers”. Needless to say, Vikram played first team for the rest of the season. We also lost Sean Trouw, Jimme Wikkerink and Frikkie Venter to the first team. We strengthened our team again with some youth players from Kampong 3 development squad, with Ashmit, Mees and even Jan making appearances. Ashmit was consistently getting wickets every game, in 6 games he bowled 48 overs and took 15 wickets with an economy of 3,46. He was robbed of a 5er by some dodgy umpiring, which made Adrian upset, to say the least. Ashmit and Mees stepped up to the challenge of playing 2nds and eagerly accepted to also open the batting. Mees was a phenomenal wicket keeper taking 6 catches before injury sent him to fine leg for the remaining matches of the season. We still had our usual suspects and true veterans of the game that made an appearance including Abhinav Adurty, Francesco Valdini, Rohit Shah, Adrian Maynier and Karel Vieler. Adrian only played 5 matches for 2nds but scored a total of 188 runs with an average of 62.6. Karel impressed with the bat with a well-played 46 against Bloemendaal, before I jinxed it. Karel also stepped in for injured Mees and took some spectacular leg-side catches and claimed some stumpings. Josh was always consitant with his bowling and able to put pressure on the opponents by rapidly getting through his overs. His fielding was variable and mostly dependent on the severity of his hangover.

We played in scorching hot and humid conditions at MOP and was sent in to field first. We couldn’t wait for the automatic sprinkler system to complete its cycle and Josh had to continuously move around at square leg to avoid getting showered by sewage odour water. The batsman spotted the opportunity and played the ball to the leg side. Josh stood still for a few seconds in fear of running through the sewage sprinklers, watching the ball travel almost all the way to the boundary and then eventually collected the ball. Our openers made a solid start and as Mees departed, I joined Ashmit out in the middle with the African sun cooking my brains in my helmet. I faced a few balls and then decided it is too hot to hang around or run singles. I dispatched a short ball for four and then Simha who was umpiring told me to hit it harder. The next one had the same result and Simha again gave me advice how to hit a six. As the temperature increased in the late afternoon, the boundaries turned into doubles and then singles and then I started overheating and decided to retire 6 runs short of a half-century.  I had faith in my team to finish the job with only 26 runs to victory. Nobody expected me to just walk off and there was a bit of confusion and a rush to get pads on. We lost 2 more wickets before Abhinav decided to end the game with a massive 6.

Reinier (opa) Poort performed well in the Zami’s and was called up to strengthen the 2nds against Bloemendaal. Opa planted himself at 2nd slip and when the ball came screaming at him he stuck out a boot to stop it, definitely saved a boundary. A few balls later the boot stopped another boundary. Sridharan Lakshminarasimhan (aka Simha or Simba) impressed with a well-controlled batting innings against Concordia. Strange that in previous games he is so relieved if he is not called to go in to bat. As always Rohit made sure that the team kept talking on the field and also became the team parrot off the field during fines meetings. It therefore came as no surprise that a parakeet chose to come sit on Rohit’s head when he was enjoying a beer on the terrace. Rohit took an amazing diving catch at cow corner to get rid of an in-form batsman, but injured himself in the process. Don’t worry the team parrot is fine.

One game which we could have easily won was against Sparta, but we simply gave it away because of 55 extras. It is difficult to explain why these things happen, but one theory is that the bowlers fear our team scorer, Claire Trouw. The deal is that she would get a G&T for every wide.

Other newcomers to the 2nds were Shashank, Madhan, Prasann, Peter Gunning and Gert senior. They fitted in well and made big impacts. The Quick Nijmegen game was finally rescheduled and was captained by Abhinav Adurty.  Kampong did well to restrict the opponents to 122, but again the extras cost us dearly. We lost quick wickets and were 48 for 6 before Rahaman and Prasann recovered the innings with a well-played 77 partnership to win the game. It might have been only half a season with no prospect of promoting, but we still played our hearts out. There is no doubt that we will do even better in 2021 and get that well deserved promotion to Overgangsklasse.